Web3: A Blockchain-based Next Era of Internet is Set to Break Cover

Decentralised internet based on blockchain technology will empower legions of social media creators and reduce their dependence on large social media platforms.

The promise of Web3, which empowers creators and reduces their dependence on large social media platforms, may become a reality in 2022, experts said.

Indian content creators are set to embrace tools on Web3, which refers to a decentralised internet based on blockchain, as they race to develop their own brands and find alternative ways of making money.

Use cases emerging from and on Web3 such as non-fungible tokens (NFTs) and digital avatars will be big themes in 2022, with multiple online influencers and agencies representing creators. This will be especially so since top influencers will look to monetise their fan base more directly and build their brands. 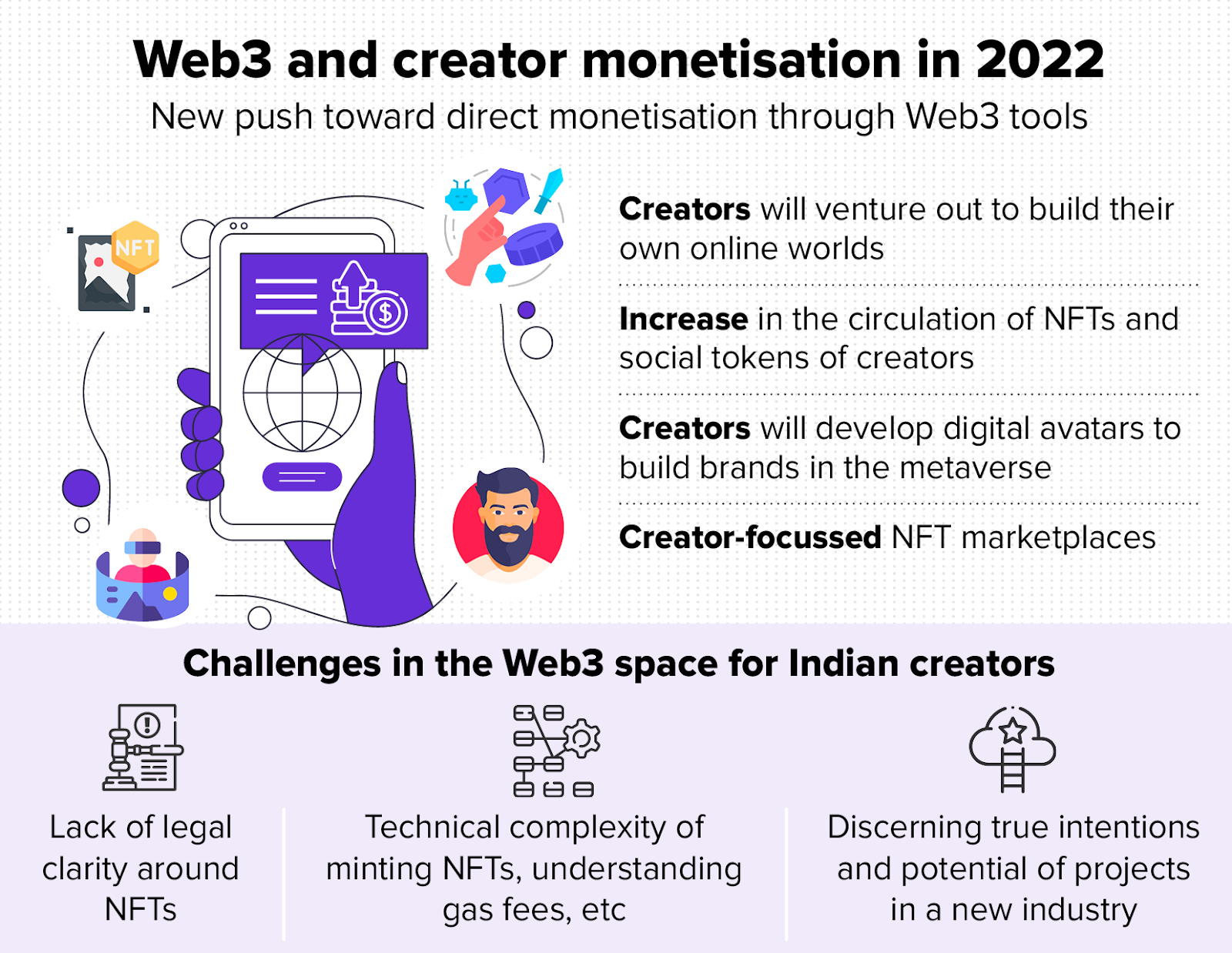 The complete realisation of platforms on the internet may seem like a distant reality, but there will be a marked increase in the number of social tokens — creator-issued tokens that give fans a stake in their work — as well as NFTs in circulation, which will further attract a new generation of creators, said Mohammad Hasan, cofounder of TagMango, which is backed by Silicon Valley-based startup accelerator Y Combinator.

TagMango is an audience monetisation platform that seeks to reduce a creator’s dependence on platforms such as Facebook and Instagram for revenue generation. By buying into a creator’s NFTs or social tokens, fans would be invested in the creator’s future.“Web3 adds dimensions to how content creators can create monetary value through their content and community. Also, for the first time, the user can find monetary value in interactions with their associated creator,” Hasan said. 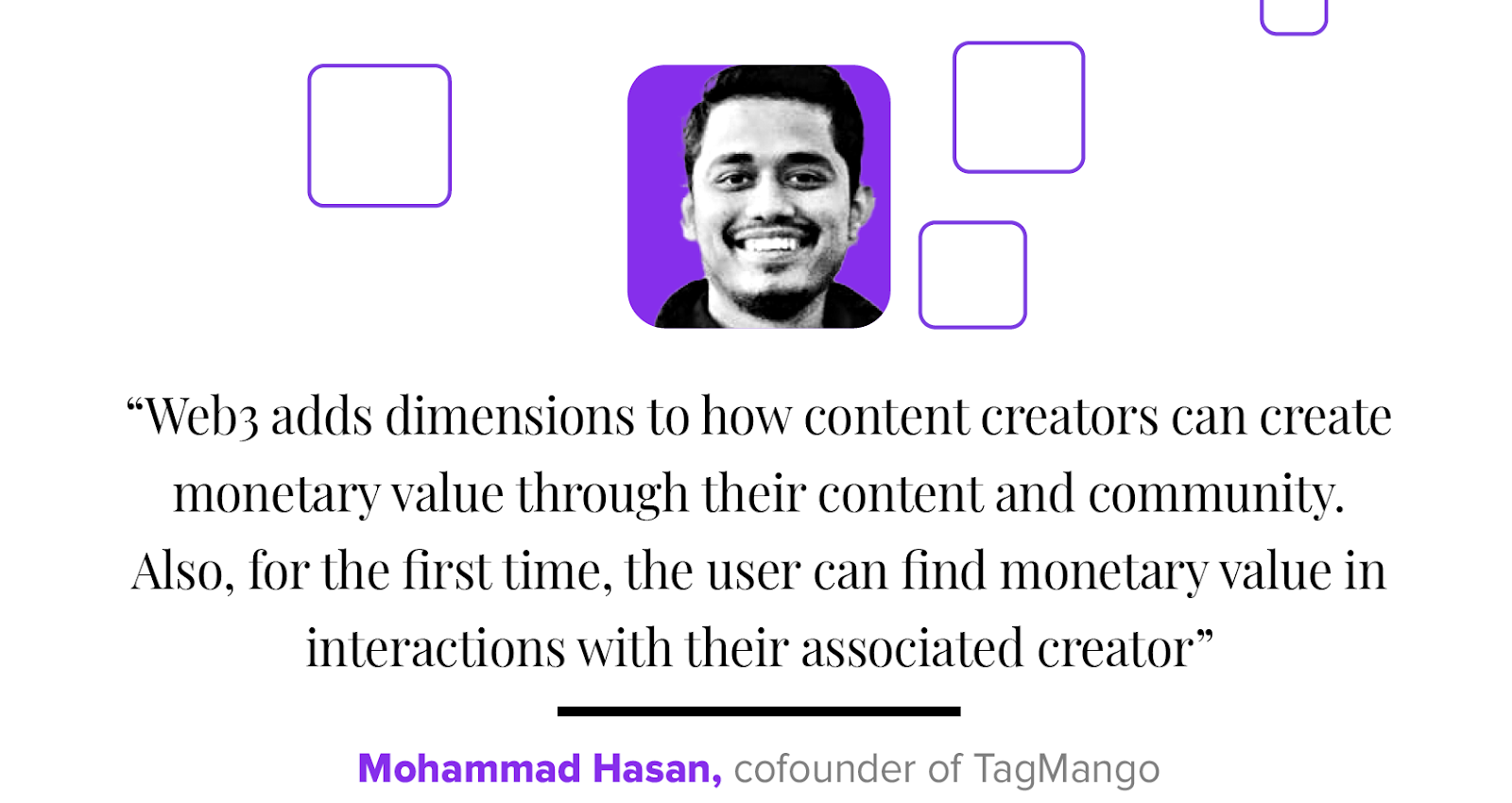 Bengaluru-based Creator-led social gaming and live streaming platform Eloelo is planning to introduce monetisation products such as gifting and social tokens for creators on its platform.

Several of these tools intend to set up a direct relationship between fans and creators. They also help fans own a part of their favourite creator’s journey or get exclusive access to their content via tokens. However, a few top Indian creators are not necessarily looking at these tools to make huge returns.Creators are minting NFTs or putting in the work to create their digital avatars for metaverse to prepare themselves for an inevitable evolution of the internet, a creator agency executive representing several top YouTube and Instagram creators said.

Masoom Minawala, a digital content creator focussed on fashion and lifestyle who has over a million followers on Instagram, said content curators will have to adapt and stay ahead of the curve to “remain relevant in this upcoming marketing universe”.

“The realms of digital clothing, exploring world-building, game creation, the modes and avenues for creators are going to be elevated and endless,” Minawala said. “Web3 is bound to change the way we curate and consume content. It’s definitely a promising revolution that aims at innovating the content economy while ensuring that there is a regularised flow of monetary needs.”

In the United States, the creator economy has witnessed a wave of celebrity artists and athletes introducing social tokens.

In India, short-video platform Chingari launched GARI tokens to allow fans to buy NFTs from creators on the app and to do other in-app purchases

Commerce will remain an integral part of this new type of internet.

Luxury brand Gucci has launched a limited collection of wearables for Roblox, a metaverse and gaming platform. Sports brand Nike bought a virtual shoe company that makes NFTs and sneakers ‘for the metaverse’ last month.

“Content and commerce are going to converge, which means today, creators are going to be able to enable commerce from the content that they’re making,” said Vijay Subramaniam, group CEO and founder of Collective Artists Network. “I think the big intersections are content and commerce meeting with new age technologies like blockchain and the metaverse, where all of this is going to eventually merge and make them have a multiplier effect.”

Last year, Walmart-owned e-commerce company Flipkart acquired Scapic, an augmented reality (AR) company, and made an early foray into the building blocks of a metaverse. Through this acquisition, Flipkart seeks to boost customer experience by publishing and creating AR and 3D content across categories such as fashion, furniture and electronics.

How far Indian creators will dabble in these tools depends on upcoming policies and the Cryptocurrency Bill, said Shashank Udupa, a digital creator as well as co-founder and chief financial officer of Scenes by Avalon, a community monetisation platform.

“Creators will use a lot of NFTs on Web3 as a good use case application, but the rules around NFTs and regulations regarding it aren’t clear as of now. So, if we get some clear rules and regulations for the NFT market in India, we will see accelerated adoption of Web3,” Udupa said.

Apart from regulations, creators said they also face challenges around the technical complexity of these tools, such as minting an NFT, understanding gas fees, as well as gauging the true intentions and potential of projects in these domains.

“You can’t judge a project based on their execution or based on the vision they have because everything is very blurred,” said digital content creator and investor Raj Shamani. “Everybody is on a thin line and has a gut feeling that they are updating. So, the challenge is if you have to judge a particular investment or project in Web3, you have to rely on a particular community or rely on a person who is building it and that is a challenge because you can’t predict until and unless you have the results.”

Blockchain technology seems to be picking up speed nowadays. The technology that emerged in 2009 as Bitcoin has now become a mainstream technology.